Evoy® is on an urgent mission to reduce boating emissions

Just imagine boating with no engine sounds except the flow of water. No smelly fumes leaking into the atmosphere. Enjoy your voyage as it should be enjoyed—in harmony with the surrounding nature and wildlife, feeling free and at ease with your loved ones.

That is what we call the Evoy® Experience. 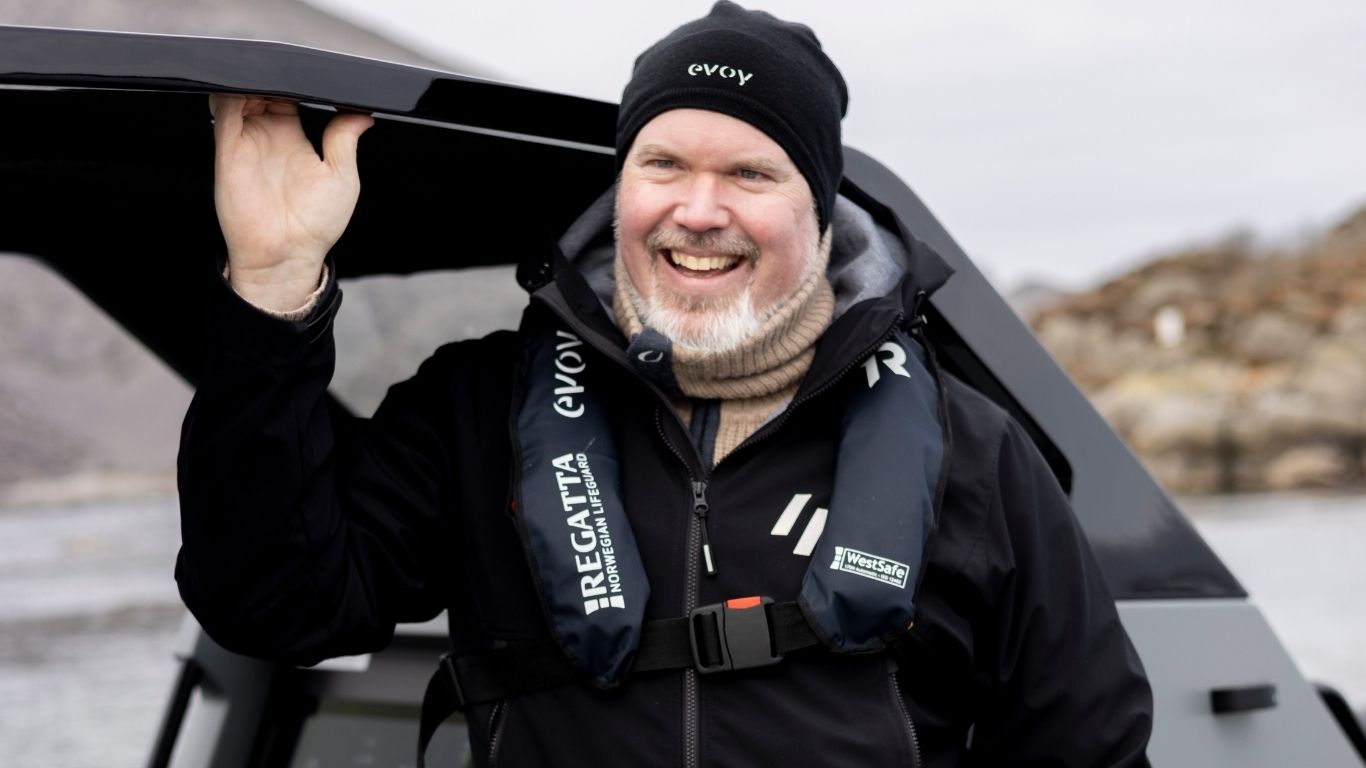 Born in Canada, but grew up by the ocean on a fairy tale island in Western-Norway, Svanøy. From an early age, boats were the main interest and where other kids focused on soccer teams and music bands, Leif had scrapbooks and posters with drawings and pictures of boats. His passion led him into a maritime career where he sailed the seven seas for many years and he has circumnavigated the globe numerous times, visiting more than 40 countries and countless ports. Experiencing collision, hurricanes, and fires, he was appointed Sea Captain as soon as the certification allowed him on an 89-meter tanker, just 32 years old.

When his first daughter was born in 2012 Leif decided to go ashore where he did a fast track career from Base Manager to COO then CEO on Norway’s largest oil supply base, Saga Fjordbase. As CEO, he delivered all-time best customer satisfaction, financial and QHSE results, in the midst of the oil crisis and heavy downsizing.

But his proudest moment was kickstarting the “Green & Lean Base” initiative cutting Green House Gasses directly and indirectly – a successful project that is still ongoing.

Underway he supplemented his competence with a B.Sc. Naval Architect and an Executive MBA. In 2018 a new era began where Leif decided to combine all his passions, concern for Global Warming, and experience together with his father Gunnar to start Evoy®. The idea was born in 2005 and had a long time to mature.

In the summer of 2019, the demo boat Evoy1 was baptized by the PM of Norway – Erna Solberg – and in the fall the boat made an unofficial World Record with 55 knots. In 2020 the first customers received their turn-key Evoy® systems in the boat of their choice.

The voyage has only just begun, and Leif is in it for the long haul!

Evoy® leads the way into uncharted waters, discovering and exploring, attentively navigating around obstacles, to open new routes for an irresistible boating experience. Being an industry pioneer is extremely rewarding to those involved and to those who follow in the wake.

We intend to change an entire industry. The boat market is changing rapidly, and we need to be responsive to succeed and ready to alter course frequently. Fitting into common plans with the marketplace.

To accelerate the green shift at sea, we need solutions that take big steps forward. We are driven by the will to do good that lives inside all of us. We shape solutions that are powerful enough to make change happen – and proceed full throttle!

We believe in making a real impact, by eliminating fossil fuel at sea. To make real changes, we also must be genuine – by being honest, fact based and transparent.

By signing up, I agree with the data protection policy of Evoy® so the company can send me more information or offers about Evoy products. I understand that I can unsubscribe at any time.

We use cookies on our website to give you the most relevant experience by remembering your preferences and repeat visits. By clicking “Accept”, you consent to the use of ALL the cookies.
.
Cookie SettingsACCEPT
Manage consent

This website uses cookies to improve your experience while you navigate through the website. Out of these, the cookies that are categorized as necessary are stored on your browser as they are essential for the working of basic functionalities of the website. We also use third-party cookies that help us analyze and understand how you use this website. These cookies will be stored in your browser only with your consent. You also have the option to opt-out of these cookies. But opting out of some of these cookies may affect your browsing experience.
Strictly Necessary Cookies Always Enabled
Necessary cookies are absolutely essential for the website to function properly. These cookies ensure basic functionalities and security features of the website, anonymously.
Functional Cookies
Functional cookies help to perform certain functionalities like sharing the content of the website on social media platforms, collect feedbacks, and other third-party features. These cookies enable the website to provide enhanced functionality and personalization. They may be set by us or by third party providers whose services we have added to our pages. If you do not allow these cookies, then some or all of these services may not function properly.
Performance Cookies
Performance cookies are used to understand and analyze the key performance indexes of the website which helps in delivering a better user experience for the visitors. All information these cookies collect is aggregated and therefore anonymous. If you do not allow these cookies, we will not know when you have visited our site and will not be able to monitor its performance.
First Party Cookies
Analytical cookies are used to understand how visitors interact with the website. These cookies help provide information on metrics the number of visitors, bounce rate, traffic source, etc. This cookie name is associated with Google Universal Analytics - which is a significant update to Google's more commonly used analytics service. This cookie is used to distinguish unique users by assigning a randomly generated number as a client identifier. It is included in each page request in a site and used to calculate visitor, session, and campaign data for the site’s analytics reports. By default, it is set to expire after 2 years,
Marketing Cookies
These cookies may be set through our site by our advertising partners. They may be used by those companies to build a profile of your interests and show you relevant adverts on other sites. They do not store directly personal information but are based on uniquely identifying your browser and internet device. If you do not allow these cookies, you will experience less targeted advertising.
Others
Other uncategorized cookies are those that are being analyzed and have not been classified into a category as yet.
SAVE & ACCEPT
Powered by

get the news first!

Join our newsletter to get the latest updates from Evoy!

By signing up, I agree with the data protection policy of Evoy® so the company can send me more information or offers about Evoy products. I understand that I can unsubscribe at any time.